I ran this down at Games & Stuff for Alan, Hudson, Mark B., Jason B., and Evil Tony. Like most Akanul region mods, it’s a straightforward linear mission. The story is a bit weak for paragon tier PCs, but the opposition is fun and it’s a very tunable module. You can make it deadly dangerous or you can dial down the difficulty as appropriate. It’s also got some interesting monsters.

The entire module takes place on a single map, which happens to be the WotC DM Reward ship tiles. The Fat Dragon Medieval Cog model is just about the same size as that map, so I built the ship, which I am very pleased with. The players liked it too. 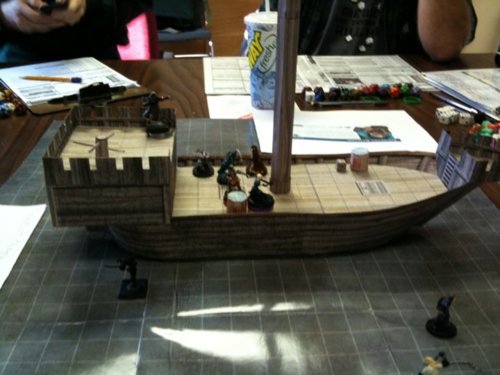 Also fun: I came within inches of forcing Alan’s pacifist cleric to give up his peaceful ways. He has this personal vow; if he ever does damage to any creature at all, he’ll give up the pacifist path. This is obviously much more restrictive than the feat requires, but that’s cool. I didn’t know any of this, but I sort of dominated him and forced him to make a charge attack against one of his allies. Barely any chance he’d hit… but he rolled a 20.

Fortunately his 4 points of damage weren’t enough to get through the ally’s damage resistance. But it was close. Neat stuff.