What do you know; it’s a different culture! Um.

That was a pretty great trip. It was really satisfying to find out that I’m still able to do a 14 day trip with one bag successfully; I’m getting older but still pretty functional. We saw places I’d never seen, which is always awesome. My backpack was stolen on the way to Budapest (literally from three feet above my head, kudos to the thief) so that was sad, but I had my electronics and passport and credit cards on me at the time so it could have been worse. I’m lucky to be able to take that kind of loss in stride.

I did find out something interesting about my resilience. I can be very minimal if I’ve planned for it, which I knew. However, as it turned out, the thought of figuring out where to buy some replacement clothing and toiletries and a bunch of other small things was daunting for me. I didn’t mind being bare bones, I minded having to reconstruct my framework for travel on short notice. In the end Delta rebooked our flight at no cost so we could cut the trip short and not spend any additional money. Right call, and we’ll revisit Budapest again some day.

Things that were underwhelming: Walt Disney Studios Park, the Disney hotel, the Imperial Quarters in Vienna, and food at Disneyland Paris (worse than Disneyland or WDW’s food).

A casual goal for the Europe two-week trip was trying a one bag approach to packing. Context, in case you’re randomly wandering across this: I’m nearing 50, I’m not in particularly great shape, but I have decent tolerance for roughing it. I’m also in the big and tall category, and was still able to find technical clothing that’d fit (albeit not with a ton of variety).

I brought an Osprey Farpoint 55 backpack, which is 55 liters of capacity spread among a main pack and a zip-on day pack. It doesn’t have as many interior compartments as I’d like but I made up for that with some packing cubes and all’s pretty well. I checked mine but I’m pretty sure I could have gotten away with carrying it on the plane.

Packing list (all clothing made with technical quick-dry fabrics):

This all fits neatly in the Osprey with some room to spare. My plan was to hand-wash laundry every night or every other night. After a couple of iterations of this I think that would be perfectly possible but better to save it for necessity. We probably had to hand-wash at Disneyland Paris since it’s not a great place to find a laundromat, but I’m currently sitting at a brown cafe in the middle of Amsterdam drinking coffee and waiting for a laundromat dryer to finish up and that’s working out just fine for me.

Next time out I’ll add a pair of socks and a pair of pants so I can go a bit longer without feeling grotty. The shirt load out depends on the weather. If I expected to need long sleeves every day I’d want an extra long sleeved shirt. As is I’ve been fine.

The Allbirds aren’t great walking shoes but they’re okay. The ankle support is fairly poor. On the other hand, they’re very light, which is why I chose them. I’ll stick with them for travel purposes. Conversely, I wouldn’t bother with the pair of sandals under similar conditions. No point bringing something I’m only going to wear around hotel rooms.

We did a quick two-day visit, which is not all that long, but I think we gave the parks a pretty good once over. Disneyland Paris itself — the castle park — is spectacular. Walt Disney Studios Park is pretty dead but has a couple of excellent rides. And Disney Village is a dull shopping area.

As hotels go: I’d kill to have enough money to stay in the Disneyland Hotel casually. It’s literally part of the approach to Disneyland Paris, and it’s gorgeous. Sequoia Lodge was fine: less polish than I’d expected from a Disney hotel but I have no serious complaints.

I am really glad we made it out for a two day trip and would recommend it if you’re a big Disney fan and have the ability to get there. In more detail…

END_OF_DOCUMENT_TOKEN_TO_BE_REPLACED

S. and I took an Amtrak up to Vancouver last Friday, hopped onto Skytrain, had a nice lunch in Gastown, and boarded the Ruby Princess for a one day repositioning cruise down to Seattle. This frivolity is brought to you by the opportunity to check out a cruise line’s style cheap before booking a longer Baltic cruise in a couple of years. We’re gonna stick with Holland America but the Ruby Princess was fun.

We’re not experts in any way, but the Ruby Princess struck us as skewing a bit younger and more flashy than the relatively staid Holland America aesthetic. (Same corporate parent, by the by.) We spent two hours on karaoke and it was fairly awesome.

The main dining room food wasn’t great and the upsell for booze was kind of tiring. The buffet was better — the Indian food had some real spice to it and I liked the roast beef a lot. I also think Holland America’s buffet had more variety.

The open pool spaces were abundant but kinda inward turned. I really liked the aft pool deck on our Holland America ship, because it was very open and you got a great 270 degree view of Alaska. The Ruby Princess has a super-cool terraced aft pool, but it doesn’t have the same panoramic view.

I’d guess the ship was maybe 60-70% full. Judging purely by the karaoke, a lot of locals had the same plan we did — fun night out and some pretty scenery.

Definitely worth grabbing one of these if you live in a cruise ship port that has ‘em.

I’d been using the Wirecutter-recommended Accell Home or Away travel surge protector for travel until recently. It’s really good, but it only has 2 USB ports and when I started traveling with an external battery, that was too few. One USB port for my phone, one for my tablet, and none for my battery? Sad. In theory maybe I stop traveling with my tablet but then I add in my headphones, which charge via USB, and I’m back where I started.

Plus I just got this watch, so. 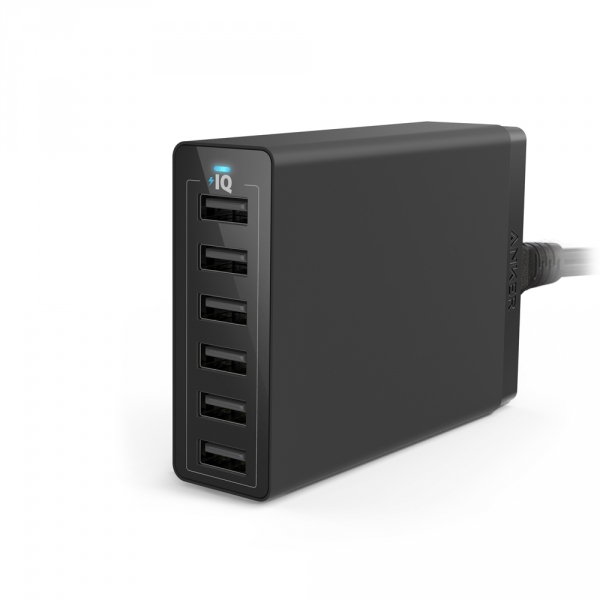 Thus, I picked up Anker’s 6 port USB charger. It’s not a hub; it’s a small brick around the size of a very full men’s wallet that plugs into a wall outlet and charges a bunch of USB devices at once. I don’t imagine it’d do great with six items plugged into it, but it’s fine for phone and tablet and external battery. Anker’s other gear has performed very well for me (cables, car USB adapters), and this seems similarly solid from one trip’s worth of experience.

For nearly 20 years I didn’t have to do much business travel. These days life is different. When my trip frequency rose above once per month I evolved a bag strategy which is both imperfect and functional. It is also very heavy on the Tom Bihn gear, because I like his bags and I tend to stick with things that work well enough. Other companies also make great stuff; my former boss swears by WaterField bags, for example. Choice is awesome.

My general theme is simplicity. Painless packing is the single most important aspect of this whole thing so keeping it simple is important. Particularly when it comes to cables, I’ve often just bought an extra cable so I don’t worry about remembering to pick one up and carry it with me. This is useful to me because I’m really forgetful. I am, obviously, fortunate to be able to make that tradeoff.

END_OF_DOCUMENT_TOKEN_TO_BE_REPLACED

Not that I saw too much of the city. My business contacts took me to Pasta e Basta on Friday, but Saturday I was laid out with a nasty cold and it’s still bad enough so that I don’t feel like going into the city. Sad. The pasta was pretty good, though, and the singing waitresses were keen. They ranged from Mozart to Dolly Parton. Musically, I mean.

Now I’m faced with entertaining myself for 9 more hours in Schiphol. Sad again. Changing the flight would run upwards of $300 and it’s just not worth it. I wonder if Starbucks would let me sleep on their couches?

I was in Frankfurt less than 24 hours so I don’t have a lot to say about that. Le Meridian Park is conveniently close to the central train station and my corporate hosts took me to a very nice Italian restaurant.

Frankfurt Airport is a pit of hell. In retrospect I should have figured out how to get to Amsterdam by train. Perhaps other gate areas are better, but D is an endless corridor with no waiting areas or shops; these things have been replaced by glassed up smoking areas that smell, even from the outside, like stale ashtrays. Bleak as anything.

I am currently relaxing in the lobby of the Schiphol CitizenM. It’s like an upscale youth hostel with relentlessly cheery staff, a canteen, and several doses of hipster. I like it a lot. Also free movies which will come in handy if I feel too sick to bop around Amsterdam tomorrow.

Cologne was great. The Excelsior Hotel Ernst, not a great business hotel, although possessed of quality service — but the location was unbeatable. Great food. Very nice beer. GDC was also quite useful; lots of vendor meetings, a few really good talks, and so on.

Gamescom really is that enormous. To put it into the context of my tribe, take the Gencon dealers room and fill it up with computer game booths outfitted by companies with money to spend instead of printing debts. Keep the 30 foot ceiling; you need it to fit the booth displays. Yes, that is a 120″ HDTV. Now turn up really loud techno from every booth. With me so far? Make the room a bit bigger. Good.

OK. Now make three more copies of that room and put them across the hall from each other. Also add five or six slightly smaller halls with less egregious booths for B2B stuff. That’s Gamescom.

Yeah, it’s my first computer game trade show. I reserve the right to be staggered. And I didn’t even see it tomorrow, when it opens to the public.

It’s the sweet taste of jet lag! I had plans to sleep as soon as I got on the evening plane out of Dulles, but with a lean-all-the-way-back traveler in front of me, that became untenable. So I watched Thor instead, which wasn’t half as bad as I expected it to be. Not a super-bright movie, but man, it’s got science fantasy vision in spades.

Schiphol Airport was huge. This is not an original observation, I know. But it’s worse than O’Hare! So that was interesting and new, even though the half an hour walk between gates was lengthy. But if you gotta do it, might as well do it at 4 AM body time, right?

In a fit of thriftiness I took the S 13 from the Cologne/Bonn Airport to Cologne proper, since my hotel’s right off the Hauptbanhof. The cathedral bells were ringing as the train pulled in, and they’re ringing right now. It’s a tremendous chunk of architecture.

Now I’m kind of killing time till 1 or so, at which point I’m going to wander out to a touristy biergarden and get some sausages, and then go pick up my conference badge. Then I’m going to try and stay awake more. There’s a sauna in the hotel but that sounds like a really bad idea in my current state.