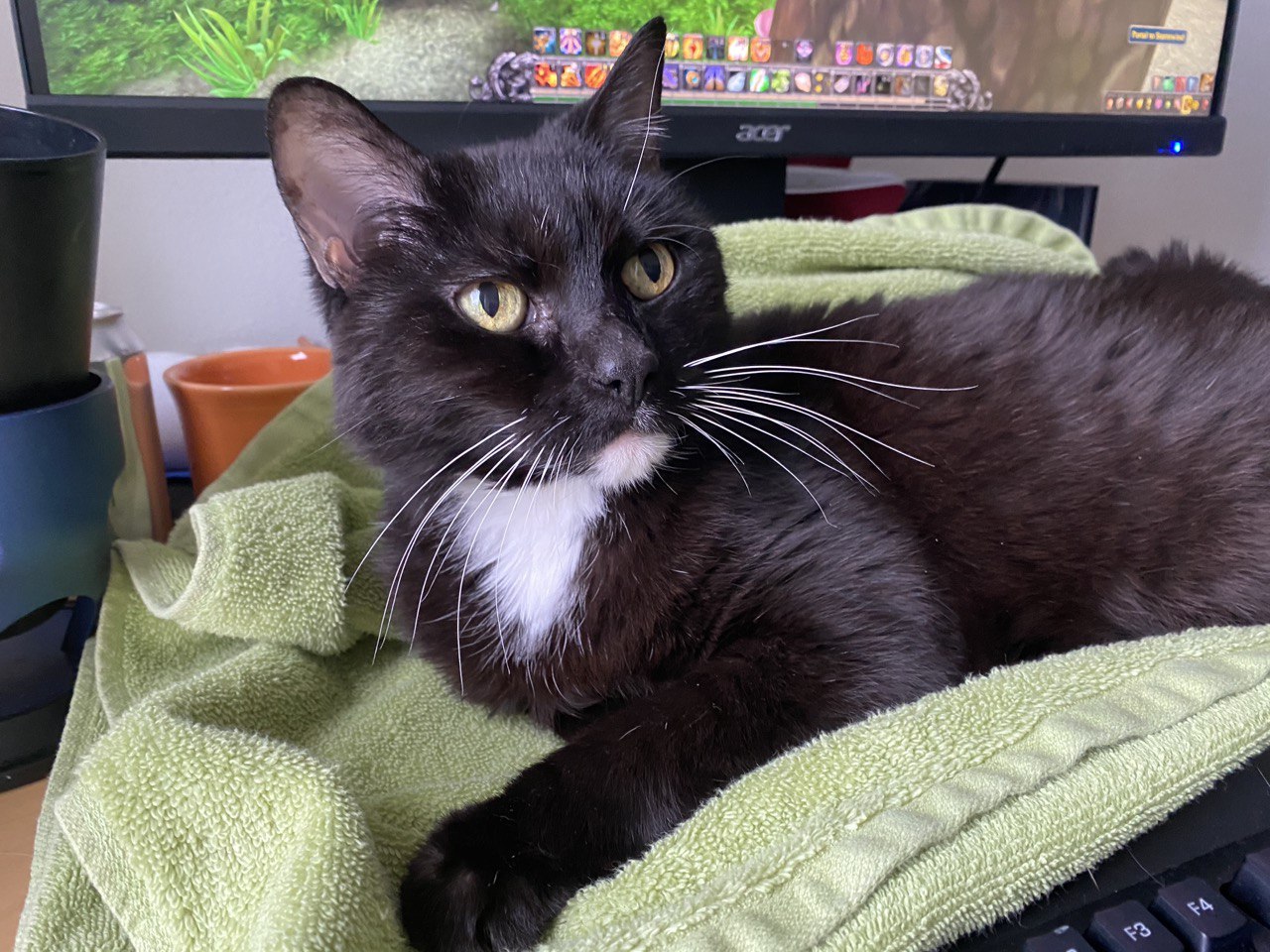 My apologies if you’ve seen this already; I mostly wanted to capture the memories in a place more mine than Twitter is. If you are sensitive to pet death, probably move on.

Our cat Bunny passed away Wednesday night. It was peaceful, as far as we can tell. She was acting normally the whole day, although she did throw up once, but she’s had a sensitive stomach for years now. A few years ago the vet told us that she either had irritable bowel syndrome or cancer, and that the treatment was the same in either case, and that finding out which it was would be both expensive and painful. We decided not to know; she would have the years she would have, and hopefully it would be closer to five years than one.

We switched to special wet food, gave her steroids once a day, and kept on loving her. So throwing up was not entirely unusual. Bunny had lost a pound or so of weight in the last couple of years, but the vet wasn’t concerned by it. We used to overfeed them.

She hung out on S’s desk all day Wednesday, especially while S was streaming, as was Bunny’s habit. A few weeks ago, S set up an extra webcam as Bunnycam, so S’s followers could see Bunny napping during streams. Bunny spent Wednesday showing her rump to a few dozen Sims 4 fans. That’s pretty much our cat for you.

After we ate dinner, we hung out in the office for a couple more hours. Bunny came back to S’s desk. After S went up to bed, while I was playing WoW, Bunny curled up under my desk and went to sleep. When I got up to head upstairs, I bumped her paw with my foot, and she didn’t react. When I went to look, well.

It had to have been quick and as painless as possible. She was still warm.

I got Susan and told her, and we came down and cried, and wrapped her in her favorite blue blanket. Maggie and Nixie are likewise fond of that blanket, but they will cope. We made sure they had a chance to see Bunny’s body — who knows what cats need, and ours are odd at the best of times. Neither seemed terribly concerned. If I’m anthropomorphizing, which I generally am, they knew it was coming just as much as Bunny did.

We’d been in Iowa the previous week. Again, anthropomorphizing, but I like to think that Bunny decided to wait until we got home to let go. If any being was able to pick her exact time, it would be Bunny. She was superbly stubborn and certain of what she wanted.

We found an emergency vet who receives pets for cremation at any hour. They were very kind. We will get her ashes in a few weeks, along with a paw print and nose print.

She had a good long life. Eighteen years! That’s a lot for a cat, even these days. (The knowledge that Nixie is likewise eighteen, and Maggie is fifteen, that is hard.) We sort of expected Bunny to pass first, because while she was in charge of the house, Nixie is a survivor. I’m grateful to her that she didn’t force us to make any hard decisions. Just let go of herself when it was time. In a strange way, this may make future hard decisions easier.

I am well stocked with Bunny memories. She did not take to me at all in the early days. Whenever I sat down on a bed she was on, she’d pointedly get up and leave. It probably didn’t help that I was Maggie’s human. Maggie wanted to be friends with Bunny, very badly, but it never ever happened. This is as close as it ever got:

Bunny is just waking up at the end, there. The cuddle didn’t last after that.

Still, there were signs Bunny didn’t hate me. For some reason she liked using my wallet as a pillow.

She was mostly always dignified, but sometimes… well, catnip.

Over the years she warmed towards me. She was always S’ cat, but she stopped protesting my presence. I can count the number of times she decided to sit on me on one hand. Each one was a gift, at the time and now.

In later years, she took to hanging out in my sock drawer. She had a distinct preference for mine. We were never sure what that meant.

Bunny liked water, when it was under her control. She loved chewing on S’ wet hair after a shower. In the mornings, she’d hang out in our shower and yell at me until I turned the water on, wait in the bathroom while I was showering, and go back into the shower for her own inscrutable purposes when I left. S always laughed when Bunny showed up downstairs afterwards, because she was so wet.

When we started her on meds for her stomach condition, it wasn’t easy to get them down her. Stubborn, right? It took about a month before we gave up on pilling her. Crumbling a pill in butter didn’t fool her. Putting powdered pills on jelly on her paws didn’t fool her. Stubborn and smart, our Bunny. We had to find a compounding pharmacy that would mix her steroids with tuna-flavored liquid, so we could put it on her food. I wrote them on Friday to tell them why we weren’t going to be refreshing the prescription. I don’t know if they’ll care, but what if they wondered and never found out? And I wanted them to know how grateful we were to them for being part of her care.

Anyhow. The liquid worked fine, and after a couple more months we came to an accommodation where I took a spoonful of the wet food and put the steroids on top and fed it to her in the office every morning. Sometimes she was cranky about it, but not often, and she almost always gave up after a few minutes. The process also gave Maggie and Nixie time to eat a bit before Bunny sailed out and took over the main bowls. That’s plural; she didn’t like eating alongside the other two cats, so she’d shoo them off.

It’s been really odd changing that process. Suddenly I have all this extra time in the morning.

Bunny was the only one of our cats who acted like a cat is meant to act. Maggie is a dog in cat form. Nixie is… Nixie.

Bunny liked our balcony a lot.

But her place, as much as she was willing to be pinned down to a particular place, was on S’ desk.

That is very close to the last photo I took of her, and I think it’s perhaps the best. I miss you terribly, Bunny.